Mendip Spring Golf & Country Club is a 27-hole complex and was designed by the late Terry Murray. It is set in the picturesque Wrington Vale, which is a quiet country setting with views towards the Mendip Hills in one direction and the Brecon Beacons in the other. Over the years, Terry has designed many courses in the South West and across Europe. Mendip Spring has matured into one of his finest projects.

The name Mendip Spring is derived from the fact that the course is fed by natural springs that run from the nearby Mendip Hills. These springs naturally feed the 11 acres of water hazards that run throughout the complex.

The site originally, called ‘Brinsea Farm,’ was surrounded by 200 acres of farmland. Before the original owners Dennis and Claire Bidwell obtained permission to develop the land into a golf course, the working farm had a health club called, Fahrenheit, which included a swimming pool and restaurant.

The 27-hole complex is split into two courses: an 18-hole Championship course called The Brinsea and a 9 -hole course called ‘The Lakeside’. The 9-hole course was opened in 1991 and proved to be extremely popular, especially with those looking to begin playing golf. The 18-hole course was officially opened in September 1992 and was built to the highest specification; sand based USGA greens and over 20 miles of secondary linear drainage work. It was imagined that once matured, ‘The Brinsea Course,’ with its combination of outstanding design and high specification, would become the major competition course it is today.

Only 5 holes of the Brinsea Course opened whilst the development continued, those holes were 1st, 2nd, 16th ,17th, and 18th and 56 members joined in that year. The remaining holes opened late 1992/93 and a further 24 members joined. 1994 saw an influx of 61 new members.

Professionals, Christine Langford and Christine Holt, were brought in on a consultancy basis to set up the membership and to run the professional shop with Robert Moss as the Assistant Professional. John Blackburn joined as a teaching Professional not long after.

During October 1993, Mr. Bob Taylor, ecologist to the Sports Turf Research Institute, added his ideas for the long-term preservation and development of the Brinsea Course. This has been implemented and over the first twelve years to great effect. Over 3,000 new trees were planted and continue to be planted. This has slowly transformed the complex from a Meadowland into the Parkland course you see today.

Your introduction to the Brinsea Championship course is a gentle par four with a dog - leg to the right, just over 300 yards long. However, you soon get a taste of what is expected of you at Mendip Spring when you get to the second hole. You are instantly faced with the first and by no means the last, of the many water hazards this complex has. A good tee shot is required to clear a lake, which covers 60% of the173 yard hole. Choosing the right club to clear this hazard is of paramount importance and it will set you up for the many challenges to follow.

The Lakeside 9-hole course is an interesting course made up of six par fours and 3 par threes. This course is set up to the same high standard as the Brinsea Course and is a cut above your average 9-hole course. Its stunning lakes and orchard make it a picturesque course and a fun challenge to negotiate. Again, club selection is of great importance if you hope to achieve the expected par of 33.

Flora and fauna throughout the complex, incorporating tiger roughs and lowland planting has attracted a wide variety of birdlife from the nearby Chew Reservoir and surrounding nature reserves. This gives the Complex a feeling of maturity beyond its years, making a pleasant, relaxing day’s golf.

After the success of the opening of both courses, a 14-bay driving range was added with a short game area. Mendip Spring is now one of the best golfing facilities in the South West with teaching taking place seven days a week by our 6 qualified PGA professionals. The professional shop is one regarded as one of best in the area with an excellent range of equipment.

To support all these activities the 16th century farmhouse, also boasts a bar, restaurant, function suite and hotel. The building has been carefully restored to retain many original features.

In 1993 the course was taken over by Yeo Finance Ltd, which was owned by both Clifford Holder and Ralph Richards. Clifford died only a short time after taking it over. Ralph Richards eventually inherited the course and took the reins for the next 21 years. After the passing of Ralph, the Mikulla family purchased the course at the 11th hour in 2014, saving it from being turned back into farmland. The course has burgeoned under their watch and with their investments it is now regarded as one of the finest facilities in the South West.

The Oringal layout before the course was built in its cuurent format. 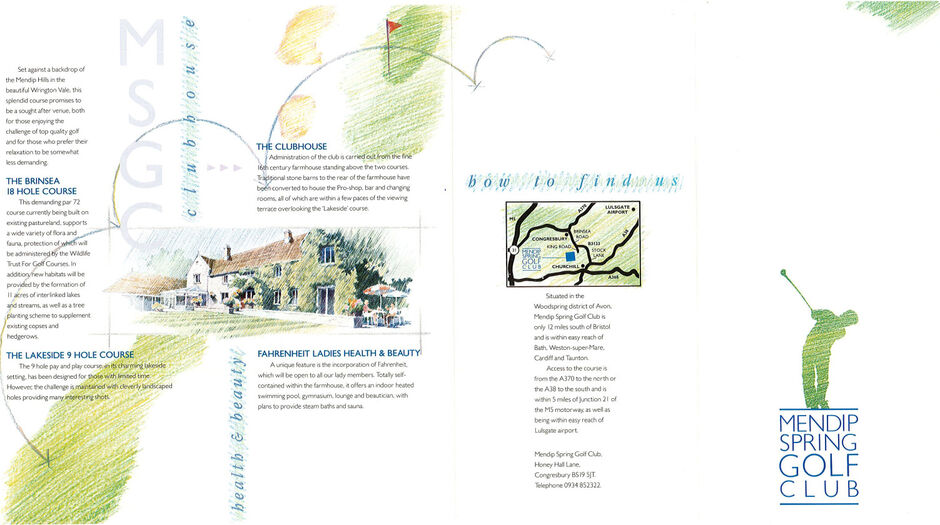 Since opening in 1991 Mendip Spring has been extremely proud of the type of golfer it has produced, with many turning professional.